skip to main | skip to sidebar

It looks like the Midland Metro Line 1 extension plans are back on the table! The Metro has been running for 10 years but currently suffers from low usage, which therefore makes it appear unattractive to extend it and to give Birmingham a world-class integrated transport system such as Zurich's. This is in no small part because "Midland Metro Line 1 currently terminates at Snow Hill, short of (and beneath) the heart of the city centre. [...] Midland Metro is therefore not seen by many city centre visitors as the preferred public transport option to access city centre destinations. Indeed for many, Midland Metro is not seen at all. Being within Snow Hill Station and down an escalator the stop and the trams, the most obvious visual signal for the system, are out of sight from street level and out of mind for many." (Centro Metro Strategic Case document).


Having spent time in Zurich and other European cities I am firmly convinced that trams should form the backbone of a city's transport network, with buses and heavy rail providing the secondary support network. This is due to the tram's high visibility, which encourages people simply to hop-on and off as needed, as even when a tram is not present the tram lines in the street indicate very clearly that "this is a tram route". This makes it far easier for passengers to plan their journeys, as buses by their nature follow the winding roads of a city and its suburbs and it can be difficult to work out which buses go where, or the best locations to change buses.

With trams, passengers benefit from a relatively low (and therefore simpler) number of high-capacity routes [compare a 200-passenger tram with 50-80 seats on a bus] which are clearly denoted both on maps, due to the non-requirement to follow winding suburban roads, and of course on the streets themselves.

Centro have updated their website with details of the city centre extension we've already heard before, but with a brand new (October 2009) business case and strategy, showing a very clear proposal to bring the Metro right into the heart of Birmingham, thus making it a visible and attractive option for pedestrians and shoppers in the city centre to travel towards Wolverhampton, and indeed fulfilling the long-missing option of a transport link between Snow Hill station and the soon-to-be-redeveloped New Street station. 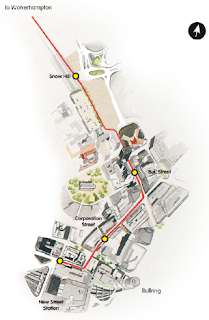 This should hopefully increase usage of the Metro by quite large levels, and in turn make future extensions along the Hagley Road, to the Airport, and elsewhere in the region more commercially viable.

The Strategy document also shows an intriguing map of a proposed "West Midlands Rapid Transit Network". It denotes the existing rail network in green, as well as the proposals for re-opening links through Kings Heath and Moseley. But also, in purple, are new 'Rapid Transit' links which appear to follow the other proposed Metro extensions on Centro's site (such as the Quinton and Brierley Hill extensions). The proposed rapid transit network appears fairly comprehensive and it will be exciting to see a modern metro system finally running on the streets of Birmingham to destinations such as the University and hospital, M5 park and ride, Merry Hill, and the Airport. 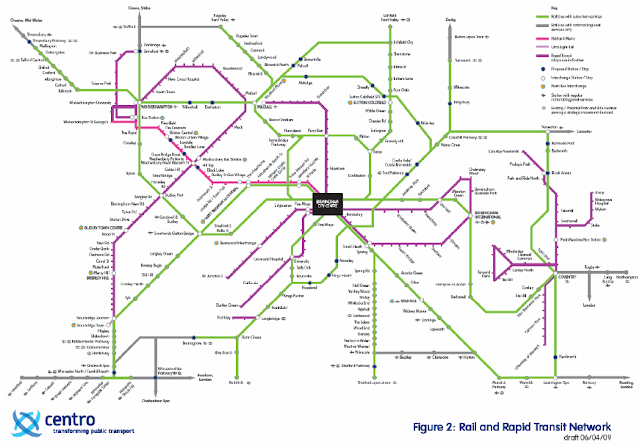 All we now have to hope is that Centro can indeed raise the required money from the Government -- never an easy task at the best of times.

(Images in this post courtesy of Centro).
Posted by Mark Rowan at 14:04